With Volume 1 of Chronicle of the Eternal current going through Amazon’s reviews, and will be live soon, I thought now would be a good time for this.

First of all, the cover art I have subtly hinted to as being amazing from time to time. The cover art was produced by Dylan Pierpont, a good friend of mine and an amazing artist. He has his own website www.dylanpierpont.com where you can have a look at some of his work. 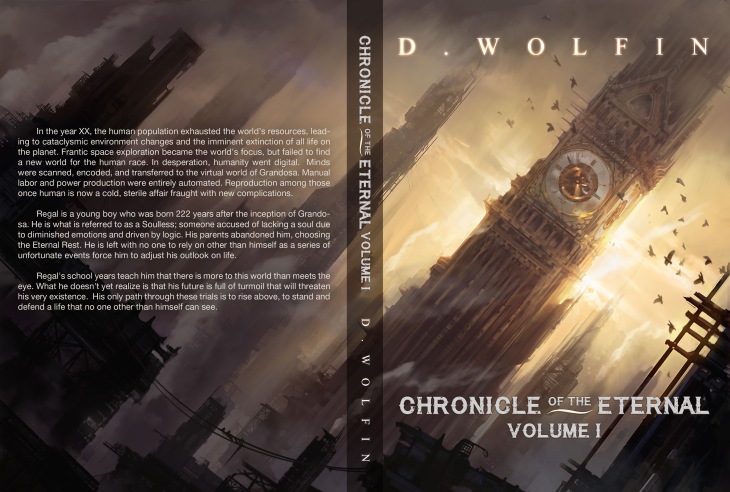 Normally I would make the images smaller in the posts, but that would be an injustice in this case.

My second piece of news is something I haven’t really told anyone as of yet, but I came to the conclusion that I should tell you all.

At my patreon page, I have posts that only those who donate $1 or more a month can view. This isn’t just the chapter plans of End Online I post, but the main part of the posts I make are the unedited chapters as soon as I finish writing them. I only warn those who want to read these is that not only is my grammar… not the greatest, I can sometimes start falling asleep while writing/typing and seem to lose my mind in the middle of a paragraph or sentence. There are also significant changes that sometimes take place during the editing process.

Anyway, you have been warned!

My last piece of news is possibly the most important. Within the next month or two (planned, but dependant on how much money I have) I am going to be printing a few paperback copies of Chronicle of the Eternal: Volume 1. They will only be private copies, so they aren’t going on sale and you can’t buy them from anywhere.

What’s the point in telling you this, you ask? Well, I am going to be giving away a few. I hope to print ten copies. One will go to each editor and the illustrator, two for me, and that leaves me with four copies to hand out. I will most likely only hand out three, keeping one aside to hand out at a later date.

I’m telling you this to get you all excited, and hopefully tell a few people about it as well. The competition will simply be to answer a question, such as what part about the story do you like the most? or what would you like to happen in the story in the future? or any other question relating to it, but it will probably be easier for those who have read the story to answer.

Let’s leave it at that for now. Volume 1 will be live soon and hopefully you will all enjoy it! I have a good feeling that this book can reach a solid average review of 5 stars on Amazon!